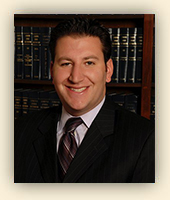 Andrew S. Buzin specializes in civil trial law, and takes cases involving personal injury, medical malpractice and wrongful death, employment and wage and hour law, and business litigation. He has earned significant verdicts at trial, including one for $28,000,000 involving a high school’s negligent supervision of a 14-year old cognitively impaired girl. He has tried numerous cases to verdict and has settled multi-million dollar cases throughout his career.

Mr. Buzin is also an adjunct professor of Lawyering Skills and Legal Writing at the Benjamin N. Cardozo School of Law.

Before practicing in New York, Mr. Buzin spent four years at a Florida law firm focusing on general negligence cases, as well as those involving legal and accounting malpractice. He also managed over 100 individual asbestos claims.

“New Rochelle school officials failed to prevent a ninth-grader from being raped by a fellow classmate in a New Rochelle High School stairwell during a school day in January 2020, a lawsuit alleges.”

See the article below or click on the following: Suit: The Rape of a 9th Grader at New Rochelle High School